How to start a freelance video editing career in Bangladesh 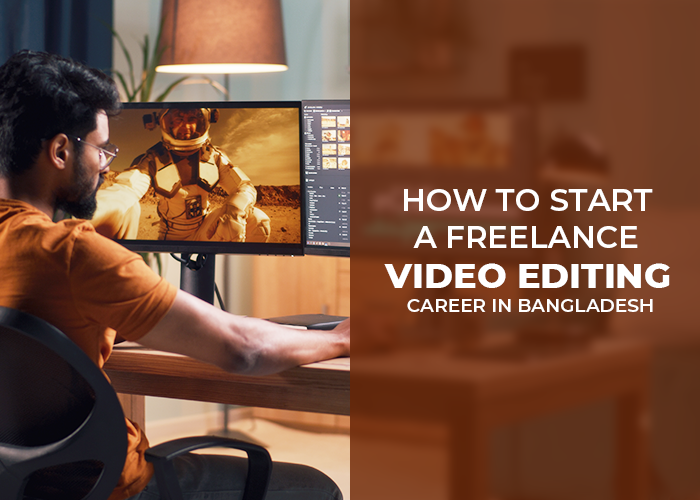 From animations, illustrations, audio, and video content, a video editor is able to image several audiovisual elements to make a video broadcast on the Internet or other media. Social networks, clips, communication spots, the possibilities are numerous. And to create quality content, this professional must be able to know editing techniques and more broadly, the entire production chain.

Surely, you will earn huge as a video editor in Bangladesh. Let’s learn about editing videos and future career possibilities.

Freelance Video editing in Bangladesh, a job that makes sense

It is fundamental to find a job that corresponds to your passion, desires, and values. To do a job that makes sense and gives pleasure to get up in the morning. Working as a video editor can allow it for those who intend to edit video content. And wishes to use his creativity in the service of a project by working as a freelancer or as an employee in Bangladesh.

Which software to use to start video editing?

To perform video editing, several software exists on the market to improve the quality of a video, sequence it, add effects, etc. Among them, three are very widely used in the middle.

Adobe Premiere Pro: A benchmarking software for professional editing and production. It is relatively complete and offers a wide range of features such as making clips, adding titles or visual effects, audio mixing, etc.

After Effects: This software makes it possible to integrate visual effects, and special graphics in order to create animated montages.

Final Cut Pro: Another reference software, deployed by Apple, it requires an apple brand processor. Very close to Adobe Premiere, it allows you to create the edits of your choice. In addition, it is optimal for sound editing videos.

The tasks of the video editor

A video editor has the task of having to create videos that highlight a brand, a video game, an advertising message, a company, or a school. It may be required to:

Sometimes, the video editor may also be in charge of broadcasting his videos.

The soft skills required by companies

Each profession has its hard and soft skills. For the former, these are technical skills that have long been the highest priority for recruiters. For the seconds, these are the so-called behavioral skills and interpersonal skills. In a world that is constantly changing – video games are an example of this – employees must be able to adapt to this change, manage it and accept it. Therefore, the human and relational dimension is important. The soft skills sought for a video editor can then be.

An editor must take into account the director's request, understand it well, and take note of all the filmed material. He must know how to find a rhythm of narration in accordance with the project which will correctly accompany the spectator in the reading.

There are many training courses that lead to working in video. If you want to work in the world of video games, choose an online video editing course specializing in this field like Ghoori Learning. Also check the program, speakers, productions, etc.

This is the case for integrating training from Ghoori Learning and becoming a video editor. Being of age, and passionate about video, cinema and photography will be the main arguments retained.

Video editor training courses focus on video. Also, you will learn all its aspects, which, in detail, correspond to.

Questions to ask yourself before getting into video editing?

Before you want to become a video editor and make it your job, it is useful to ask yourself a few questions. These will determine your orientation, the choice of training, and your professional project.

The salary of a video editor in Bangladesh

Depending on the company he works for, the remuneration of a video editor can be very different and more or less important. In Bangladesh, we expect nearly 25 to 30,000 Taka per month at the starting level. The status will also depend on it— from a freelance, intermittent, or full-time video editor to a company.

How to find a job as a video editor?

The sites below regularly advertise job and internship offers. Whether they are focused on video games or more generalists, you will be able to find the shoe that suits you. Check them regularly.

A video editor can move up the ladder by first becoming an assistant editor, editor, and then chief editor. What is rather true in the cinema for example. In an agency, a web company, or a video game studio, as soon as you leave school, you can take up the position of a video editor.

Freelance video editor, how to do it?

This is one of the fashionable statuses among video editors. Many have made this choice to evolve independently and thus work on behalf of several clients. The freelance video editor can thus intervene for a video game studio and television or even cinema or the web. The possibilities are many. Having a long experience in business is a good asset to then work alone.

How to become a video editor abroad?

As with any job, practicing it in another country is quite possible. Los Angeles, London, Berlin, Tokyo, why not fly elsewhere to become a video editor? If the desire is strong, however, you must prepare for your expatriation well.

So, first of all, you have to ask yourself if you speak the language of the country well or at least the one that is used in the company. Then, you will have to combine your skills and first work in a portfolio in order to show your future employer what you are capable of.

A video editor who masters editing software like Premiere can work for a video game studio, a web agency, an advertising agency, etc.

Choosing the profession of video editor involves undeniable advantages and disadvantages, here are some of them:

What are the missions of the video editor?

The video editor is a bit of a jack-of-all-trades when it comes to talking about audiovisual production. It is he, for example, who is responsible for creating videos that will be broadcast on different channels such as Youtube, websites, or social networks.

He is therefore able to look for illustrations, select images, and sometimes be required to film, therefore to write a screenplay, then carry out the editing, and then the sound mixing. Sometimes he does not carry out all these missions, but only one or two, other members of his team can take care of them.

The whole thing is that he must guarantee a certain quality and consistency in his work.

What is the salary of a video editor?

The remuneration of the video editor is variable according to several criteria. For example, his salary will not be the same if he works freelance or on a permanent contract. If he has several years of experience or is out of school. Then depending on the company, he works for, a web start-up and a video game publisher.

This is why the range observed starts from nearly 25,000 Taka. But of course, it can go a little higher.

What is the training or courses to become a video editor?

The courses of Ghoori Learning allow one to master the image, the sound, the realization, and the production. In other words, surrounded by professionals, we give you all the keys to becoming independent and creative. And above all to be able to emerge competent in order to be quickly operational.

How to become a video editor?

Creating videos broadcast on social networks, websites, and other platforms, it requires mastering several aspects of production— from editing to broadcasting.

Working as a video editor means being able to know the audiovisual professions well, the techniques for conducting filming, and achieving good editing. It also means being able to meet the needs of the company by making a short, powerful video, with a strong message, etc.

Designing videos that can be broadcast on the Internet, for example, requires certain knowledge and expertise in audiovisual matters. Mixing, shooting, selection of illustrations, a video editor is able to do a bit of everything. This is why it will be necessary to go through training to become a video editor in Bangladesh. At Ghoori Learning, Video Talent will allow you to be operational as soon as you leave school.

Answer these 5 questions to assess yourself and get a bonus 5 points.